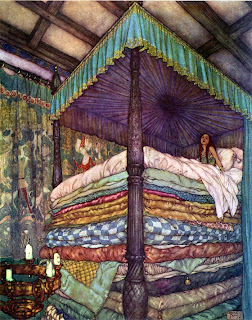 When I look back through older eyes at the child that I was I see a rather fey creature. Fey, yes that's the word, one of my favorites but, since it has a number of meanings I should define it as it applied to me. The phrase from "Polly Wolly Doodle" comes to mind: "Fare thee well, my fairy fey." My dictionary reads as follows: fey--whimsical; strange; otherworldly: a strange child with a mysterious smile and a fey manner. I was all of that to others; to myself, well, I was just me.

Imaginative would not have begun to describe me. Maybe it was all of the fairy tales my mother read to me from my very early days, the ones I read to myself from age three. Yes, I could read when I was scarcely old enough to hold the book. And I soon discovered that to read was to enter another world, to sail to another shore, to fly through the air, or to pick a wildflower on top of a far-away hill. Reading was tailor-made for the fey.

And so I lived in castles with worn-out dancing slippers and spinning wheels and elves. Of course I was a princess, but I was a secret one: in disguise. I wasn't like the others in my family, so surely I must have been left on the doorstep by a fairy. No one really knew my true identity, or if anyone did I wasn't told, but it would be revealed one day. Certainly the handsome prince would recognize me when he finally found out where I was but that was years away. Until then, I would just have to live as everyone else did, in spite of my royal blood.

Then, when I was five years old, I happened upon the story of "The Princess and the Pea." A single pea placed under a stack of mattresses upon which the princess slept so bruised her delicate body that she was unable to sleep; of course, no one but a princess would have had the same reaction. That was it! The test of a true princess, and such a simple one! I knew what I must do. So I waited patiently for the eventful day when my mother would finally open that which I needed for the proof of my royalty: a can of peas. Well, of course I only needed a single pea and the only peas I had ever seen were in cans. I was aware that canned peas were soft and squishy things, but those qualities just made the test that much more challenging--and conclusive.

The fateful day arrived more quickly than I had expected. The can was opened in the afternoon; the test was to be that very night! As fortune would have it, I was easily able to procure a single pea without arousing anyone's interest. Since I only had one mattress, and a boxspring, of course, I determined to take my sister's mattress. She was only four and didn't understand my pressing need, so she went straight to my mother who informed me that I would have one mattress and no more. The trials of a princess can be so burdensome! Thwarted in that effort, I was inspired to stack pillows, every spare one I could find, on top of my mattress; since I was rather small, the desired effect would surely be achieved by this means. I read and waited for the sun to go down.

I kissed my parents goodnight quite early that night. I'm sure that it was a happy surprise for them to be able to trundle me off to bed just then so that, for once, they could enjoy a quiet evening alone. The precious pea had been placed by my own hands under the mattress on top of the box spring, and there were perhaps two feet of pillows towering above it all. Dressed in my most princess-like nightgown, I managed to climb up to the top of this arrangement and settle myself there. The test had begun!

Minutes seemed as hours, the night wore on , and I was wide awake, trying to determine whether I felt any bruises just yet; I didn't dare turn on the light to check because surely my parents would see it and would curtail my efforts. So the time passed, quite slowly at first, but then I closed my eyes for a moment--no longer, of course--and suddenly, it was morning! The sun was up, the test was over! Now, for the bruises. I looked very carefully but could find nary a one. I hadn't slept--well, not the whole night, any way--a positive sign, of course; but I had expected that I would be black and blue, and my skin was, unhappily, completely unmarked.

Then the thought occurred to me: maybe the pea had been dislodged in the night. That would explain the lack of bruises, of course. I carefully removed the layers of bedding and looked under the mattress. The pea was gone, leaving only a small green spot where it had been. I knew it! That explained everything! If only the pea had stayed in place, I would have shown the effects; but it had obviously rolled out some time in the night. There just hadn't been enough weight to hold it down; after all, I should have used more than one mattress as it had been done in the story. There was only one thing to be done: repeat the test, this time with a stack of mattresses. And I knew just the place: my grandparents' house. Surely my grandmother would help me. After all, she had given me a small crown not long before. Clearly she knew my true identity.

The sound of the telephone ringing in the distance disturbed my reverie. Some minutes later, my mother came into my room to tell me about the phone conversation. My grandmother had called to say that I had been chosen as a lady-in-waiting to the queen of a Mardi Gras ball. I was to go to the ball in a satin dress and to walk behind the queen's train as part of her court. My mother must have wondered at her fey child as I stood smiling with more than a bit of mirth in my eyes. There would be no need for the mattresses now. Here was proof-positive of my royalty, and a most wonderful one at that. I ran to my closet and found the little crown which my grandmother had given to me, placing it knowingly upon my head. It seemed the right thing to do since the secret was out, after all. Now, to practice my curtsying; a princess must be able to curtsy, of course. And the dancing slippers? Mine were quite worn, but I knew that my fairy godmother, I mean my grandmother, would buy a new pair for me just in time for the ball.
Posted by Kindred Spirit at 9:02 AM 4 comments

From an old letter...

"When the world gave him thorns,
she gave him a rose;
when the coldness made his salty cheeks dry,
she brought tears to his eyes.
The flower was a brief moment that dried;
the tears watered new roots,
a rose grew in his heart;
it blooms under her sunshine."

--from Braveheart
Posted by Kindred Spirit at 8:03 AM 0 comments

"Hearts are drawn together by talking of their kindred pursuits, souls by speaking of heavenly things."

--from Gold Dust
Posted by Kindred Spirit at 7:37 AM 0 comments