Tonight I knelt beside a man who is dying. He is my age, and he has only a few weeks, perhaps a few days, to live. He has no wife, no children, only an unmarried sister to care for him; and so my daughter and I went to visit him. As I prayed the Rosary just inches from him, a keen sense of his sufferings swept over me. Each breath he took was an agony for him, and his hand clasped a small crucifix ever so tightly. How hard it was to watch him endure the pain, how much harder for him to suffer it! The hospital room felt empty and cold--even harsh--being devoid of so many human touches, filled as it was with equipment and medical devices.

Our humanity--what is it really in this world? I think that, after our duty to God, it is really not much more than the opportunity to offer to each other little kindnesses and compassion, the chances which God gives us to show His love to our fellow creatures in this life: this life which passes so quickly before us all. We are the way in which He goes about doing good in the world, said Saint Teresa of Avila. We are His hands, His eyes; His touch comes through us, His love shines in our faces, if only we will be His instruments. It is so simple; it is not so easy.

As I said goodbye to this heroic man, my eyes met his; and I saw the beauty of a soul resigned to God's will. His face, even through his anguish, was radiant with the light of peace. I promised him that I would pray for him; and I asked him to pray for me. He smiled and said that he would. His prayers--clearly I have received the greater gift tonight.
Posted by Kindred Spirit at 10:54 PM 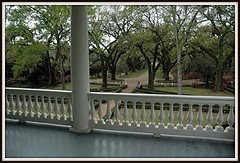 I grew up in the deep South, in a different world, I think, from that which existed in many other parts of the country. Life was slower there , people were warmer, and responsibilities seemed much clearer. There were admirable customs and behaviors peculiar to the region, and those of us who lived there knew them well and cherished them as part of our heritage. Kindness, gratitude, and honesty, while sadly not universally practiced even there, were nearly universally held as the standards of basic civility. Along with those came generosity, a genuine concern for the well-being of others, and a willingness to help one's neighbor as one's duty to God. Hospitality was the order of the day, and strangers soon became acquaintances. I stress that, while many of these are Christian teachings, the ways of which I've written were clearly of the culture. I think it would be true to say that this was Christian culture in practice.

Some of us transplanted "old school" Southerners have retained many of these cultural traits, carrying them with us, as we have our other possessions, to our new homes. It is here where the differences become apparent. The reality of it all is that, as a fellow Southerner has written on his blog more than once, the Old Southern ways are sometimes misconstrued by those to whom they are not known; and the results are not always benign. Such an unintended outcome is completely contrary to the code of the Old South, which is never to give offense or cause harm. It is not my intention to claim here that this Southern way is the better way--I leave that to your discretion, gentle reader--but rather to show that it is a different way.

How interesting, then, it has been for me to have discovered "North and South", a BBC series based upon Elizabeth Gaskell's book. It seems that this cultural disparity between these two geographic areas existed, and exists still, not only in our own beloved country but also in another country which is quite dear to me, namely, England. Though I lived there for nearly a year, I was not aware of the depth of the regional differences and the propensity for misunderstandings because of them. It is a reality, though, to which I can well relate. And so here is another clip from "North and South", whose scenery and gentility remind me a great deal of my daydreams from times past in Southern Louisiana. 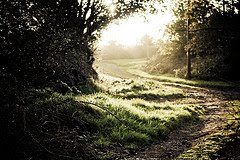 "I cannot fix on the hour, or the spot, or the look, or the words which laid the foundation. It is too long ago. I was in the middle before I knew I had begun."
Posted by Kindred Spirit at 2:31 PM Use the talents you possess--for the woods would be a very silent place if no birds sang except for the best.

--Henry Van Dyke
Posted by Kindred Spirit at 12:07 AM 0 comments