Every knee shall bend... 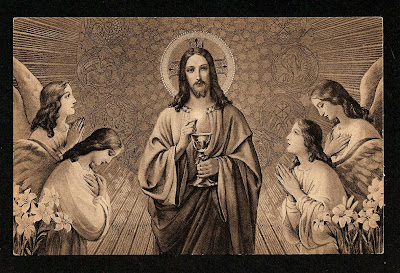 This article was recently sent to my daughter by a friend of hers, and I am publishing it here for those who haven't yet heard of this directive of the Holy Father. May Almighty God bless him for restating the constant teaching of the Church on the Most Blessed Sacrament; and may Our Lady lead us ever closer to Our Savior and Our King.

Pope Benedict to Catholics:
Kneel and Receive on the Tongue Only

Pope Benedict XVI does not want the faithful receiving Communion in their hand nor does he want them standing to receive Christ in the Blessed Sacrament. According to Vatican liturgist, Monsignor Guido Marini, the pope is trying to set the stage for the whole church as to the proper norm for receiving Communion for which reason communicants at his papal Masses are now asked to kneel and receive on the tongue.

The Holy Father's reasoning is simple: "We Christians kneel before the Blessed Sacrament because, therein, we know and believe to be the presence of the One True God." (May 22, 2008)

The pope's action is in accord with the Church's 2000 year tradition and is being done in order to foster a renewed love and respect for the Eucharist which presently is being mocked and treated with contempt. The various trends and innovations of our time (guitar liturgy, altar girls, lay ministers, Communion in the hand) have worked together to destroy our regard for the Eucharist, thus advancing the spiritual death of the church. After all, the Eucharist is the very life and heartbeat of the Mystical Body around which the entire Church must revolve.

Kneeling also coincides with the Church's centuries old ordinance that only the consecrated hands of a priest touch the Body of Christ in Holy Communion. "To priests alone has been given power to consecrate and administer to the faithful, the Holy Eucharist." (Council of Trent) This teaching is beautifully expressed by St. Thomas Aquinas in his Summa Theologica: "Because out of reverence towards this sacrament, nothing touches it, but what is consecrated; hence the corporal and the chalice are consecrated, and likewise the priest's hands, for touching this sacrament."

It is for reason that Pope Paul VI in his May 1969 pastoral letter to the world's bishops reaffirmed the Church's teaching on the reception of Communion, stating that: "This method on the tongue must be retained." (Memoriale Domini) This came in response to the bishops of Holland who started Communion in the hand in defiance of the centuries old decree from the Council of Rouen (650 A.D.) where this practice was condemned as sacrilegious. "Do not put the Eucharist in the hands of any layperson, but only in their mouths." To date this prohibition has never been overturned legally.

Today Communion in the hand is carried on illegally and has become a major tool of the enemy to destroy the Faith throughout the world. For this practice serves no other purpose than to warp our conception of Jesus Christ and nourish a contempt for the sacred mysteries. It's no wonder St. Basil referred to Communion in the hand as "a grave fault." That is to say, Communion in the hand is not tied with Catholic tradition. This practice was first introduced to the Church by the heretical Arians of the 4th century as a means of expressing their belief that Christ was not divine. Unfortunately, it has served to express the same in our time and has been at the very heart of the present heresy and desecration that is rampant throughout the universal Church. If we have 'abuse' problems today it is because we're abusing the Sacrament - it's backfiring on us!

Thanks to Communion in the hand, members of satanic cults are now given easy access to come into the Church and take the Host so that they bring it back to their covens where it is abused and brutalized in the ritualistic Black Mass to Satan. They crush the Host under their shoes as a mockery to the living God, and we assist it with our casual practice? Amongst themselves the satanists declare that Communion in the hand is the greatest thing that ever happened to them, and we do nothing to stop it?

Hence, the Holy Father is doing his part to try to purge the Church of abuse and we as members of Christ are called upon to assist him. For your encouragement we include the following quotation from Cardinal Llovera, the new prefect for the Vatican's Congregation for Divine Worship and Discipline of the Sacraments speaking to Life Site News on July 22, 2009: "It is the mission of the Congregation for Divine Worship and Sacraments to work to promote Pope Benedict's emphasis on the traditional practices of liturgy, such as reception of Communion on the tongue while kneeling."

Also worth considering is the recent decree from Cardinal Caffarra, the Archbishop of Bologna Italy, forbidding the practice of Communion in the hand: "Many cases of profanation of the Eucharist have occurred, profiting by the possibility to receive the consecrated Bread on one’s palm of the hand... Considering the frequency in which cases of irreverent behavior in the act of receiving the Eucharist have been reported, we dispose that starting from today in the Metropolitan Church of St. Peter, in the Basilica of St. Petronius and in the Shrine of the Holy Virgin of St. Luke in Bologna the faithful are to receive the consecrated Bread only from the hands of the Minister directly on the tongue." (from his decree on the reception of the Eucharist, issued April 27, 2009)

Technically all bishops and clergy are bound to follow the Holy Father's directive on this issue, but in the meantime the faithful are not obliged to wait for the approval of their bishop in order to kneel for God. The directives of the Holy Father are not subject to the veto or scrutiny of the bishops and therefore all pastors and laity have a right and duty to put these directives into practice for the edification of their communities.

Posted by Kindred Spirit at 4:35 PM

"We find rest in those we love, and we provide a resting place in ourselves for those who love us."

--Saint Bernard of Clairvaux
Posted by Kindred Spirit at 7:34 AM 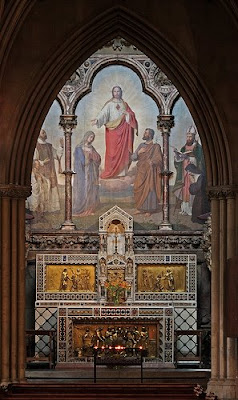 Posted by Kindred Spirit at 7:17 AM