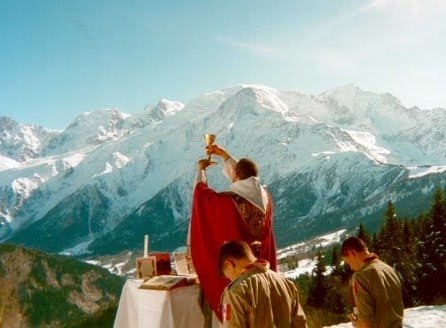 "Fish live in the sea and are silent. Terrestrial animals cry out, but the birds, whose vital space is the heavens, sing. Silence is proper to the sea, crying out to the earth, and singing to the heavens. Man, however, participates in all three: he bares within him the depth of the sea, the weight of the earth, and the height of the heavens; this is why all three modes of being belong to him: silence, crying out, and song. Today...we see that, devoid of transcendence, all that is left to man is to cry out, because he wishes to be only earth and seeks to turn into earth even the heavens and the depth of the sea. The true liturgy, the liturgy of the communion of saints, restores to him the fullness of his being. It teaches him anew how to be silent and how to sing, opening to him the profundity of the sea and teaching him how to fly, the nature of an angel; elevating his heart, it makes that song resonate in him once again which had in a way fallen asleep. In fact, we can even say that the true liturgy is recognisable especially when it frees us from the common way of living, and restores to us depth and height, silence and song. The true liturgy is recognisable by the fact that it is cosmic, not custom made for a group. It sings with the angels. It remains silent with the profound depth of the universe in waiting. And in this way it redeems the world.”
--from the writings of then-Cardinal Ratzinger, now Pope Benedict XVI
(Thank you, Father Tim, for your post @
http://the-hermeneutic-of-continuity.blogspot.com/2010/06/different-kinds-of-silence-at-mass.html)
Posted by Kindred Spirit at 2:16 PM